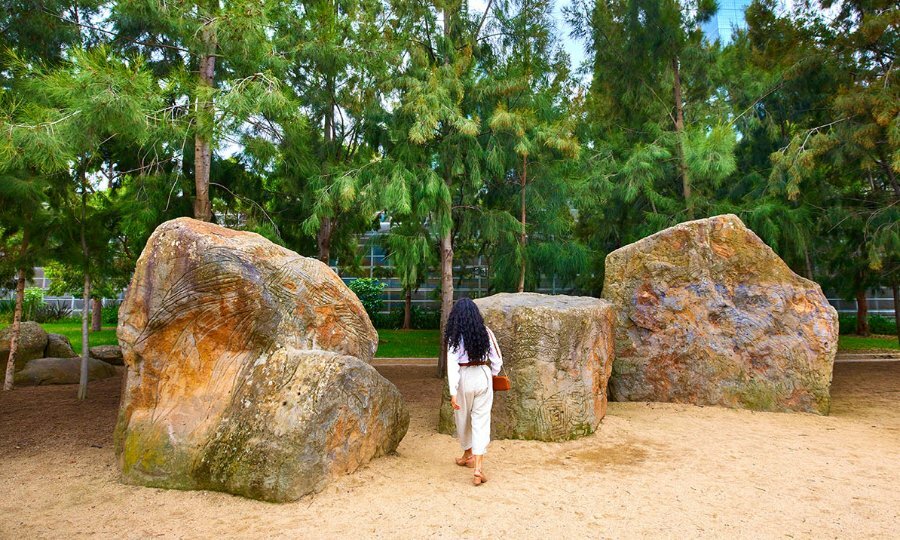 Womindjeka / wominjeka! That means welcome in the languages of the Traditional Owners of the area now called Melbourne.

The City of Melbourne respectfully acknowledges the Traditional Custodians of the land, the Bunurong Boon Wurrung and Wurundjeri Woi Wurrung peoples of the Eastern Kulin Nation and pays respect to their Elders past, present and emerging.

Today we are proud to say that Melbourne is a significant gathering place for all Aboriginal and Torres Strait Islander peoples.

Find out more about Aboriginal culture through these places and events, and follow Aboriginal Melbourne on Facebook.

Discover Melbourne's Aboriginal heritage and culture on this walking tour of significant sites, from Melbourne's Fitzroy Gardens to the harbour at Docklands.

Based at Federation Square, the Koorie Heritage Trust promotes Aboriginal culture through an ever-expanding collection of art, cultural artefacts and oral histories. The centre offers a regular program exhibitions, workshops and tours.

This popular park along the Yarra River is named from the Wurundjeri people who originally inhabited the area: ‘birrarung’ means ‘river of mists’ and ‘marr’ relates to ‘side’.

The Birrarung Wilam art installation celebrates Victoria’s Aboriginal culture, while a semicircle of metal shields represents each of the five groups of the Kulin Nation.

The centre is named after Bunjil, the eagle creator deity of the Kulin Nation. Under his metaphorical wing, the centre presents permanent and temporary exhibitions, as well as events and activities.

If you've never tried local delicacies like saltbush fried crocodile or charred emu with cassava crisps, then grab a seat at the communal table. This Indigenous-owned and run restaurant in Fed Square celebrates First Nations' food and culture.

In the spirit of community, dishes are designed for sharing. Pumpkin damper with golden syrup butter is essential, as is a bucket of the charred king prawns.

Hamer Hall's new cafe is a celebration of native flavours, from strawberry gum brownies to kangaroo pies. Enjoy lunch outside or stop in post-show for cheese and local wine.

See new works by artists from the Warlukurlangu Arts Community.

Specialising in Aboriginal art from the red desert area of central Australia.

Fine Aboriginal art from the Central Western Desert, the Kimberley and Arnhemland.

An exhibition of First Peoples contemporary art from Canada, NZ and Australia.

Indigenous Art from the NGV Collection

Discover art that builds on and challenges tradition in Indigenous Art from the NGV Collection.

Explores the chequered history of the stream we call the ‘city’s river’.

A park beside the Yarra River commemorating the landing of the first settlers.

Explore Melbourne's public museums and galleries along with artist-run and commercial galleries.

Make the most of your visit to Melbourne with our monthly guides to what's on in the city.

Melbourne has a thriving film scene, with film festivals and screenings at cinemas year-round.