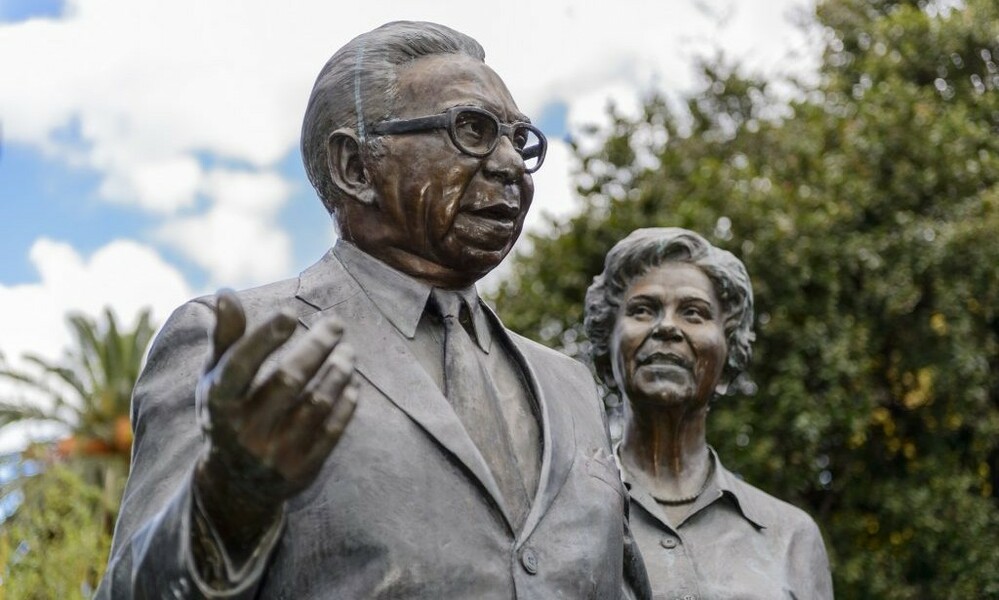 This walking tour of 14 significant Aboriginal sites will take you from Melbourne's Fitzroy Gardens to the harbour at Docklands. You'll see artefacts of Aboriginal history and culture including scarred trees, historical meeting places and monuments.

The City of Melbourne respectfully acknowledges the Traditional Custodians of the land, the Bunurong Boon Wurrung and Wurundjeri Woi Wurrung peoples of the Eastern Kulin Nation and pays respect to their Elders past, present and emerging.

For the Kulin Nation, Melbourne has always been an important meeting place for events of social, educational, sporting and cultural significance. Today, Melbourne is a significant gathering place for all Aboriginal and Torres Strait Islander peoples.

As a couple, Pastor Sir Douglas and Lady Gladys Nicholls were instrumental in the 1967 referendum campaign, pressing the case for Aboriginal reconciliation well before it became a popular view.

This granite and brass paving inlay at Parliament House uses a circa 1880 painting by William Barak.

The artwork references the site as a traditional ceremonial ground and meeting place for the people of the Kulin Nation.

Scarred trees have had bark removed by Aboriginal people to create canoes, shelters and shields.

When bark is removed, the tree grows around the ‘scar’ creating a unique appearance.

More scarred trees can be found at Melbourne Zoo and Yarra Park.

The flag above Town Hall acknowledges Aboriginal people as the Traditional Custodians of the land.

In 2012, the Aboriginal flag was permanently raised on Melbourne Town Hall, acknowledging Aboriginal people as the Traditional Custodians of the land on which the City of Melbourne is located.

This popular park next to Federation Square features some striking Aboriginal art.

In the language of the Wurundjeri and Boon Wurrung people, ‘Birrarung’ means ‘river of mist’ and ‘Marr’ refers to the side of the river.

A monument marking the remains of Aboriginal people repatriated from the Museum of Victoria.

A granite boulder marks the skeletal remains of 38 Aboriginal people from Victoria, repatriated from the Museum of Victoria in 1985.

It was the first successful repatriation of Aboriginal remains in Australia.

7. Gayip (from 'The Travellers' installation)

This installation celebrates Aboriginal presence and the meeting of cultures through migration.

Gayip is a Woiwurrung word that describes the ceremonial meeting of different Aboriginal clans through dance and storytelling.

This plaque at the Immigration Museum commemorates the race won by an Aboriginal schoolboy in 1876.

The plaque, made of stone and brass, was intentionally placed in contrast to the plaque commemorating John Batman's landing in 1835.

This artwork, located in Enterprize Park, is made from 30 recycled pier posts.

'Scar – A Stolen Vision' (2001) is a collaborative artwork by Aboriginal and Torres Strait Islander artists.

Made from wharf poles recycled from Queens Bridge, the sculptures evoke the Aboriginal cultural tradition of scarred or culturally modified trees.

Each carved pole represents an aspect of Aboriginal life, history or mythology and, like the trees they came from, are a testament of endurance.

'Eagle' is made of timber and aluminium and is a tribute to Bunjil, the Kulin Nation’s creator spirit who appeared as an eagle hawk after creating the land, the lore and people.

The design of this pedestrian and cycling bridge was inspired by an Aboriginal eel trap.

The bridge, connecting Docklands and South Wharf, was designed and created by architects Denton Corkel Marshall and artist Robert Owen.

Now a park, this area once provided local Aboriginal people with plentiful food.

The name Buluk means ‘wetlands’ in the Woiwurrung language of the Wurundjeri people. Before European arrival, this area provided local Aboriginal people with plentiful food and resources.

The location of 'Reed Vessel' was once tidal wetlands, providing abundant food and spiritual connections for its traditional owners.

This artwork commemorates two Aboriginal men who were publicly hanged in Melbourne in 1842.

Behind the Melbourne City Baths is the artwork 'Standing by Tunnerminnerwait and Maulboyheenner' by Brook Andrew and Trent Walter.

It was commissioned in 2016 by the City of Melbourne to honour the two Aboriginal men who were hanged here in 1842.

These ghost stories, eerie encounters and spooky spots will send shivers down your spine.

Reemerge from a long lockdown and rediscover Melbourne through this entertaining 3-hour tour.

Uncover the stories behind Melbourne's landmarks, gardens and events on this free walking tour.